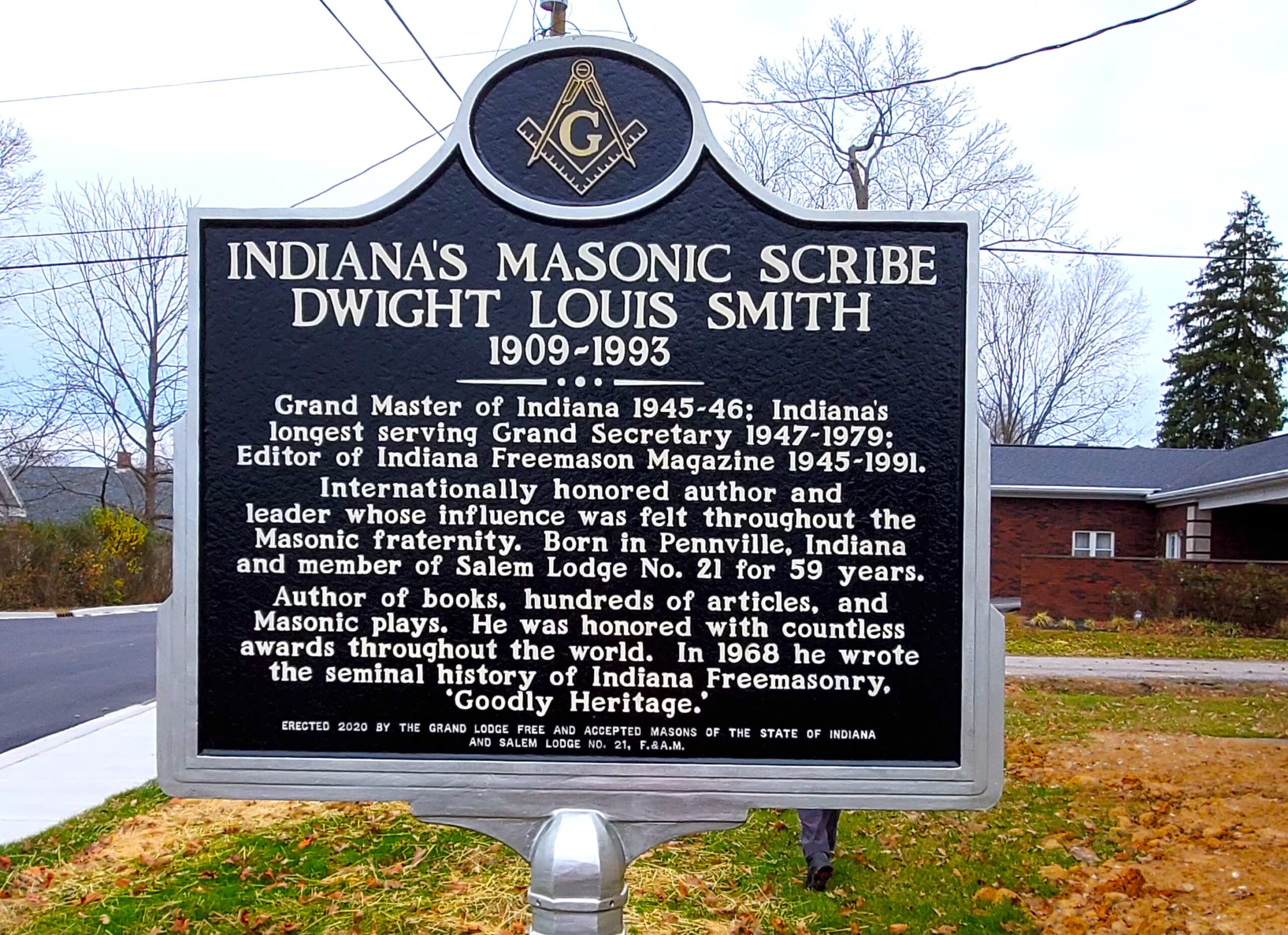 On Saturday, April 24th, 2021, Grand Master Kenneth Roy, Jr. and the officers of the Grand Lodge F&AM of Indiana dedicated a new Masonic historical marker in memory of Indiana Past Grand Master and Past Grand Secretary, Dwight L. Smith.  The dedication was held at Salem Lodge No. 21. Dwight Smith was born in Pennville, Indiana in 1909, and he was a member of Salem Lodge No. 21 for 59 years. For many years, he also served as the local editor for Salem’s hometown newspaper, the Salem Republican-Leader.

It was altogether fitting and proper that Indiana’s most senior Past Grand Master, Richard E. Hickam took part in the plaque dedication ceremony. During his term as Grand Master in 1970-71, he worked closely with Dwight Smith.

Dwight served as the Grand Secretary for 32 years, and editor of the Indiana Freemason Magazine officially or unofficially from 1945 until 1991. Smith passed away in 1993 and was internationally honored as an author and leader whose influence was felt throughout the Masonic fraternity. He was an author of books, hundreds of articles, and Masonic plays. Throughout his career, he was honored with countless awards all over the world. Indiana Masons today largely know him for writing Goodly Heritage, a history of Indiana Freemasonry, in 1968. His booklets, Why This Confusion in the Temple? and Whither Are We Traveling? were published in the early 1960s, and continue to inspire and influence Masons all over the world.

The marker in Salem erected to Dwight Smith is the 28th Masonic marker and the first new official Grand Lodge plaque installed in the state in 40 years. It was Dwight Smith himself and his Sesquicentennial Committee that first conceived of erecting permanent markers throughout Indiana at important historical Masonic sites between 1965 and 1981. The last one dedicated by Grand Lodge was in Mitchell, Indiana, the home of NASA astronaut and Freemason Gus Grissom.

The Dwight Smith plaque is the second such Masonic marker placed by the Grand Lodge in historic Salem, Indiana. Several hundred feet away in Salem’s Crown Hill Cemetery, the Grand Lodge dedicated a plaque to the memory of John Hay Farnham back in 1972. He served as one of our earliest Grand Lecturers in 1820-21, and as Junior Grand Warden in 1821-22.

Farnham was a passionate campaigner for the new State of Indiana to open public schools at a time when just one out of every eight Hoosier children were able to read. Beginning in 1826, he battled for the cause of public education for the rest of his life. Farnham was also the foundering secretary of the Indiana Historical Society in 1830. Salem’s historic Pioneer Village museum is named after him – the John Hay Farnham Historical Center.

The original powder-coated finish of the Farnham plaque had deteriorated over the last half century, and it was recently restored by brethren in Salem for this occasion. Because of inclement weather on the date of the Grand Lodge ceremony, both markers were brought inside the lodge for the ceremony. Once installed, Dwight Smith’s will be placed in front of the lodge building, and Farnham’s will be returned to its place in Salem’s Crown Hill Cemetery.

For several decades, the Grand Lodge Historical Commission was charged with maintaining and regularly reporting on the condition of the Masonic markers across the state. After several years of dormancy, the Commission has been identifying possible new locations for future markers in Indiana. If you or other members of your lodge have suggestions for a plaque to mark a significant event, location or individual, please contact the Commission chairman, PGM William Reiners at william.a.reiners@gmail.com .