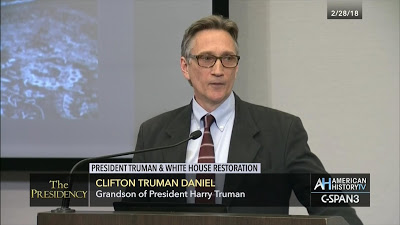 On Monday, April 13th, the Grand Council of the Allied Masonic Degrees (AMD) presented an online discussion with Brother Clifton Truman Daniel about his grandfather, President Harry S Truman. I was graciously invited to facilitate this presentation. Clifton and I discussed some of the quite public Masonic events during Truman’s career as a senator, vice-president, and finally as president.

Clifton Truman Daniel is a member of Chicago’s Oriental Lodge 33. If you haven’t heard Clifton speak before, he is the eldest grandson of Harry Truman, and he inherited his grandfather’s talent for gregariousness and storytelling. I recommend his book, Growing Up With My Grandfather: Memories of Harry S. Truman.

Harry Truman has come up a lot among us Freemasons in the last few weeks as the COVID-10 Wuhan virus pandemic shutdown rolled across America. Truman was a Past Grand Master of Missouri, a 33° Scottish Rite Mason, and coincidentally, the 33rd President of the United States. He was an ardent supporter and promoter of Freemasonry.

What you may not know that he was just as full-throated a promoter of the fraternity all the way back to 1909 when he first joined a lodge after spotting a Masonic ring on the finger of a visitor to the family farm. Even during battles in France in World War I, Truman wrote to his future wife Bess about proudly bringing friends, fellow soldiers and officers into the fraternity. If you’ve never read Brother Truman by Allen E. Roberts (written back in 1976), it’s an exhaustive survey of Truman’s letters, statements and activities related to Freemasonry throughout his lifetime. But since Roberts’ book came out more than 40 years ago, more has come to light about Truman’s remarkable life and his influences both from and on the fraternity.

We talked about Harry Truman’s role in expanding and focussing the mission of the Masonic Service Association, his famous visit to an Indiana lodge for a young sailor’s Master Mason degree while on his campaign whistle stop tour across the midwest in 1948, the White House foundation stones with operative stonemason marks he personally had sent to every Masonic grand lodge in the U.S. during the mansion’s complete reconstruction in the 1950s, and much, much more.

We were also joined by Missouri’s MW John W. Hess who has some exciting and recently discovered information about Ray V. Denslow and the ‘secret’ Masonic mission Truman sent him on across Europe after the end of the war. Denslow was charged by the President to research the suppression of the Masonic fraternity by the fascist regimes in the 30s and 40s, the destruction of lodges, and the looting of their records as the Nazi forces invaded country after country. Truman ultimately wanted Denslow’s report to formulate a plan to rebuild European Freemasonry in the post-war years, much as the Marshall Plan would do politically and economically. This is a remarkable and fascinating story all by itself, and I hope much more can be unearthed about it in the coming years.

The Missouri Lodge of Research has just published a two-volume set of Ray V. Denslow’s Masonic Journey  reminiscences, and it opens up an enormous thread of study about this critical moment. Quite honestly, European Freemasonry might not have recovered as it did without the dedication of both Truman and Denslow — something few researchers knew about until these books were released lst year. (By the way, it was Ray Denslow’s son William, also a PGM of Missouri, who wrote 10,000 Famous Freemasons.)

Harry Truman’s tenure during and after World War II as vice-president and then president following Franklin Roosevelt’s sudden death in 1945 marked what was arguably the most complex and world-changing period in history. Historians look back at the period and most agree that Truman was the right man at the right time, and accomplished more in seven years in the Oval Office than two dozen average peacetime presidents combined. The sheer magnitude of plans, programs, conflicts, resolutions, organizations, and truly epochal changes (like the only wartime uses of the new atomic bomb) that occurred on his watch is staggering to behold. And yet, we continue to see these episodes in which he nurtured and publicly promoted Freemasonry while the entire world was upside down. Freemasonry remained important to Truman all his life, and believed with all his heart that the world would be a much better, safer, smarter, more peaceful, more thoughtful place if more men would adopt its precepts. Would that we had that kind of dedicated crop of leaders today anywhere.

Many thanks to Aaron Shoemaker, Eric Diamond and AMD’s Sovereign Grand Master Glen A. Cook for asking me to participate and making this happen so quickly.

The Youtube recording of this live event can be seen at the link above or at: https://youtu.be/T2krINagsiY