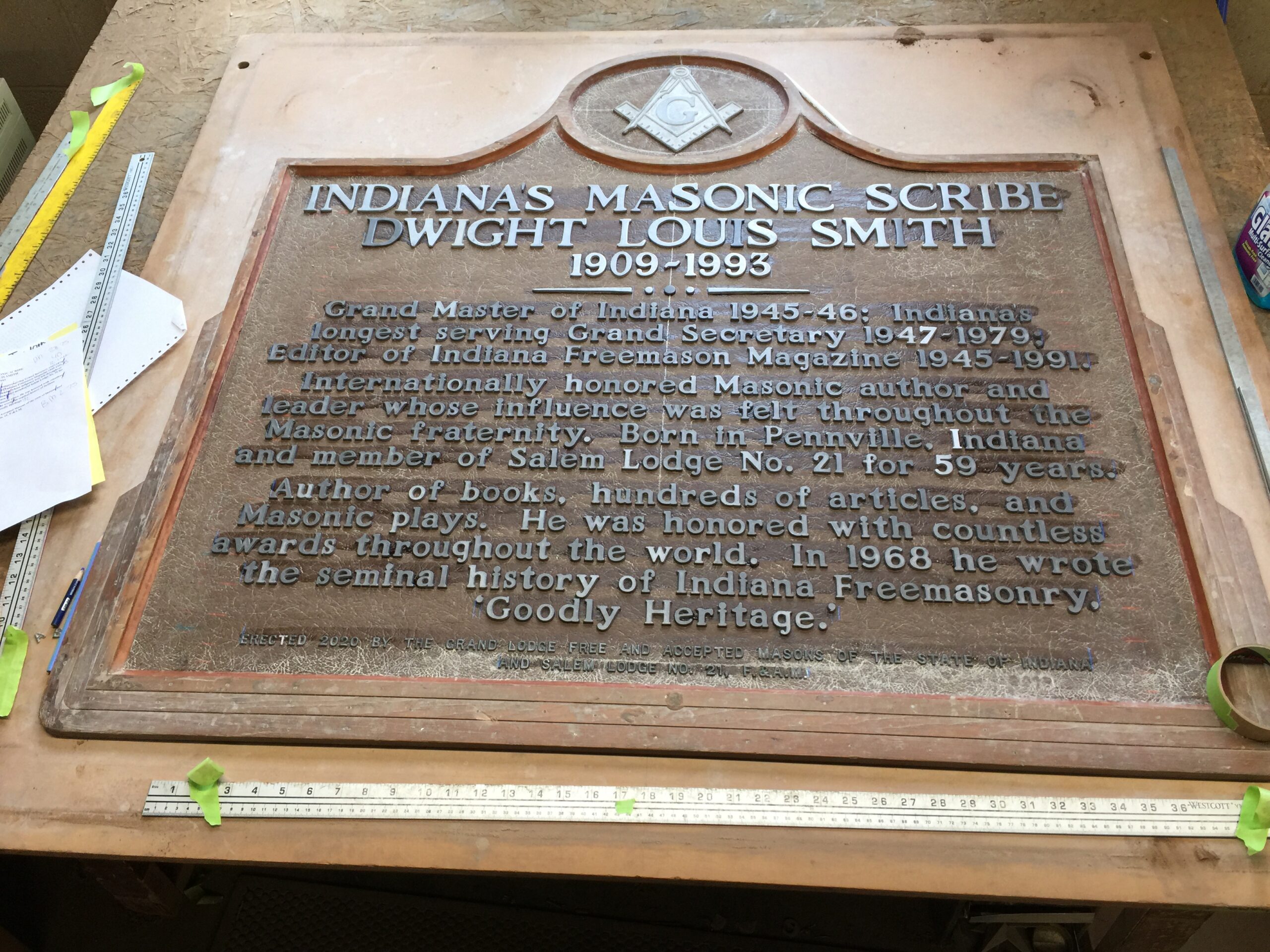 UPDATED JULY 20, 2020: DUE TO INDIANA’S COVID VIRUS RESTRICTIONS, THIS EVENT HAS BEEN POSTPONED BY THE GRAND MASTER AND WILL BE RESCHEDULED.

It’s been four decades since the Grand Lodge of Indiana has erected any new historical markers across the state, but that will change on April 11th, 2020.  MW Kenneth Roy Jr. and the Grand Lodge officers will dedicate a new and long-overdue plaque recognizing the achievements and contributions of Dwight L. Smith, PGM, to Indiana Freemasonry.

Perhaps you’ve read his indispensable history of Indiana Freemasonry, Goodly Heritage, and forgotten the author’s name.  Or you may have heard of the Dwight L. Smith Lodge of Research without knowing who he was. Born in 1909, Dwight Louis Smith become a Freemason in 1934 in Pennville Lodge 212, when he turned 25. Three years later he was elected as the Worshipful Master of Salem Lodge. Just 11 short years after he joined the fraternity, he was handed the reins of the state’s fraternity as its Grand Master at the age of 36. Then, in December 1947, 18 months after leaving office, Dwight was appointed Grand Secretary. He would hold that position for another 31 years, the longest serving Grand Secretary in Indiana Masonic history.

Grand Masters would come and go, leave a mark or vanish into obscurity, but Dwight Smith remained like a cornerstone weathering the storms, the snow and the heat, year after year. He was finally replaced as Grand Secretary in 1979, but his commentary lived on for another 30 years as part of the “explanatory notes” in the Blue Book of Indiana Masonic Law, and in the Secretary’s Handbook he had written, that the Grand Lodge distributed for decades—so much so that thousands of members believed his personal opinions were part of those regulations. Hundreds of Masters and Secretaries, when confronted with arguments over interpretation of Masonic laws, would shake their heads and solemnly assure their members, “But it’s in the Book!” It was there because Dwight put it there.

Dwight was a trained journalist. He became editor of the local newspaper in Salem, Indiana in 1934, and he grew up living and breathing Indiana history. He brought that same zeal for Indiana and its founders into Freemasonry when he became a very active young member. He would soon take on editing the Indiana Freemason magazine, a position he held more than 40 years. He took an ordinary monthly Masonic newsletter and transformed it into an internationally acclaimed, informative Masonic magazine that was subscribed to by even more readers outside of the state than in it. It was very different from what it is today, and every issue contained thought-provoking Masonic education, editorials, international news, and historical accounts.  At the time, it was considered one of the very best Masonic magazines in the world, informative and influential.  (Check out his decades of writings online.  You can find all of the back issues of the Indiana Freemason Magazine dating back to 1923 on the website of the Masonic Library and Museum of Indiana at www.mlmindiana.org)

In 1968 he wrote the seminal history of Indiana Freemasonry, Goodly Heritage.  He authored hundreds of articles, three Masonic plays, and four other books, including the widely influential Whither Are We Traveling? and Why This Confusion In the Temple? During his lifetime, Dwight was honored with countless awards throughout the world.  He was truly Indiana’s Masonic Scribe, and it was through his writings and influence that the Grand Lodge of Indiana became one of the most widely respected jurisdictions anywhere in the Masonic world.

The Grand Master will dedicate the new plaque at Salem Lodge on April 11th.

NOTE: Due to the COVID-19 pandemic shutdown in Indiana, this dedication event has been postponed and will be rescheduled later in 2020.